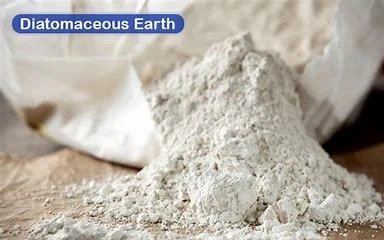 Diatomaceous earth (DE) is a naturally occurring deposit of fossilised diatoms, silica rich ancient marine creatures, that absorb amorphous silica in their outer shell & exoskeletons. It is a naturally occurring, soft, sedimentary rock, formed from prehistoric times when Australia was covered by inland seas. As the seas dried, over millions of years, these natural DE deposits formed this sedimentary earth, which is easily crumbled into a fine white to off-white powder. DE has long been an excellent soil additive due to its ability to absorb water as well as be a rich source of plant available silica. Diatomaceous earth is an easy way of building soil silica levels contains an abundant plant available Silica important benefits to plant health, ranging from increased photosynthesis, increased physical strength, increases in plants ability to absorb nutrients, reducing of pest and fungal attacks as well as a greater tolerance to environmental stress such as heat, drought, salinity and soil toxins.

The above details have been extracted from an article by Plant of Health.

Diatomaceous Earth as an Insecticide

The tiny skeletons of microscopic creatures can be a gardener’s best friend when it comes to organic pest control. Diatomaceous earth, or DE as it is known, is made of the fossilized remains of tiny water plants called diatoms.Diatoms are microscopic or near microscopic plants (ranging from two to 500 microns, or up to about ½ mm) similar to algae and found in nearly every habitat that contains water. They have distinctive transparent cell walls made of silicon dioxide hydrated with a small amount of water (SiO2 + H2O). Their shapes resemble intricate snowflakes and are the result of the impervious nature of their silica based structure. When diatoms die they leave behind chalky deposits of fossilized skeletons known as diatomite. This material is mined and ground to the consistency of talcum powder. DE is composed of roughly 3 per cent magnesium, 2 per cent iron, 19 per cent calcium and 33 per cent silica along with several other beneficial micro elements. This composition is useful for both insect control and as a valuable food source.The fossilized remains of the diatoms cause no harm to humans but to insects these microscopic remains are razor sharp. To an insect it is like crawling through broken glass. The diatoms pierce the exoskeletons of soft-bodied insects causing them to dehydrate and die. Food-grade diatomaceous earth does not contain toxins or chemicals, but it is an effective pesticide against a wide variety of garden pests including aphids, mites, thrips, ants and squash bugs to name just a few.There are two methods for applying diatomaceous earth to your garden.

Fill a garden duster, shaker container or flour sifter with diatomaceous earth. Avoid creating dust by using a small shovel or trowel to scoop the powder into the container. Although diatomaceous earth is non-toxic, you should not breathe in the fine dust. Consider wearing a disposable face mask if you will be working with large quantities of the powder or if you have respiratory issues.Shake the powder onto the plants you desire to treat. The best time to do this is in early morning or late evening, when the plants are wet with dew. The moisture helps the dust to adhere to the plant. Diatomaceous earth won’t harm insects when it is wet, but it will be effective once it dries. Shake the powder on the vegetables as well as the leaves; the powder can be easily washed off the vegetables prior to consumption.Apply more diatomaceous earth around the base of the plants and the area surrounding the garden; this will keep many crawling insects from ever reaching your plants.

Add 4 tablespoons of diatomaceous earth into a one-gallon container of water with a lid the seals tightly. Screw the lid on and shake vigorously until the DE dissolves into the water.• Fill a spray bottle or garden pump sprayer with the mixture.• Spray the plants with a fine mist until they are wet but not dripping. Spray the undersides of leaves too.• Allow the plants to dry. As the water evaporates the DE is left behind as a protective barrier which adheres to the plant’s leaves and stems.With both wet and dry applications it is important to remember that diatomaceous earth is only an effective pest control when dry; the powder works as long as it is visible. It may be necessary to reapply DE after it rains. Also reapply the powder if the wind blows it away. Lastly, do not use a heavy layer of diatomaceous earth on the leaves of your plants. This can block sunlight from reaching the leaves and interfere with photosynthesis; a thin, even layer is all that is needed.

The above article was written by David Kessler.

David Kessler heads research and development at Atlantis Hydroponics and writes for their popular blog. David has more than two decades of experience and multiple degrees from the State University of New York. An accredited judge for the American Orchid Society, he travels the world judging events.