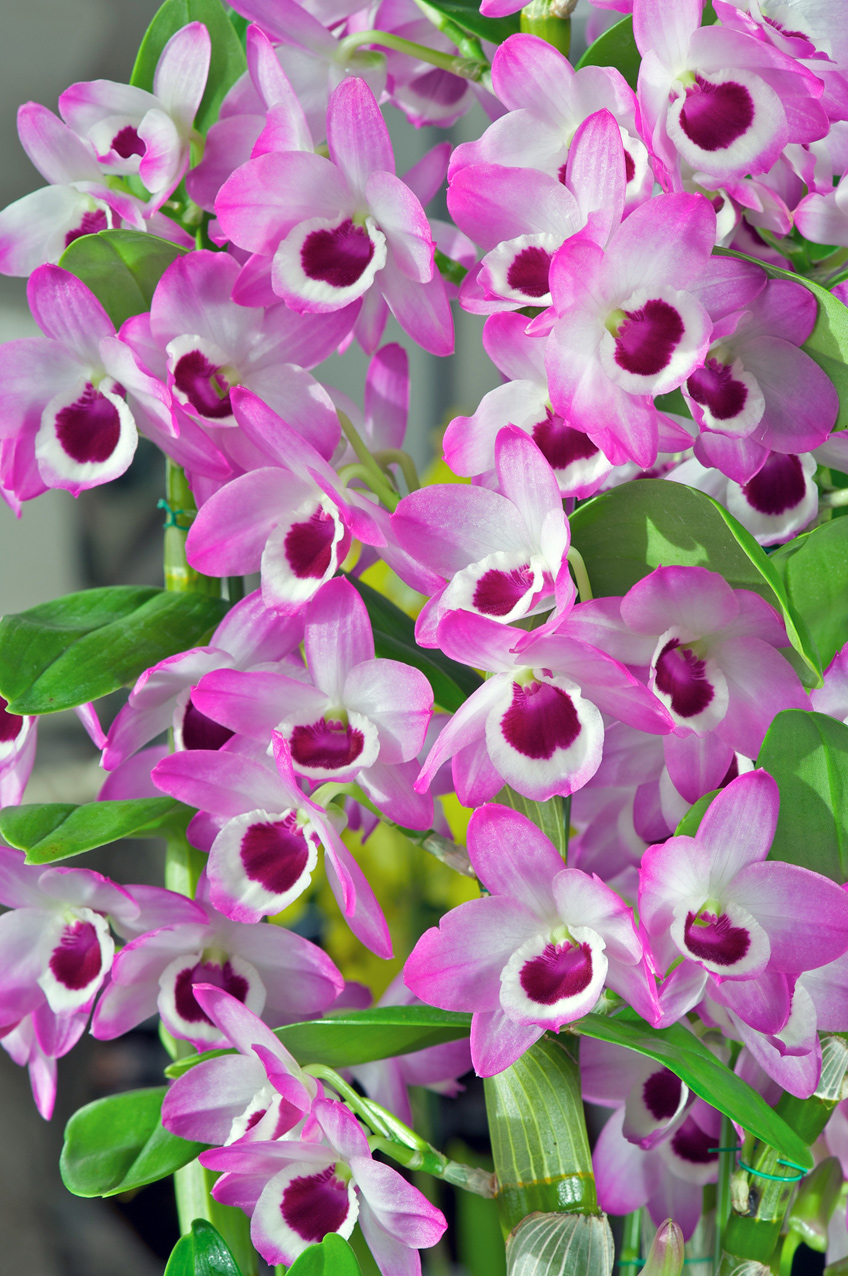 Soft Cane (Nobile type) Dendrobiums must be one of the easiest of all exotic orchids to grow and flower. The range of colours available is unsurpassed by any other type or genus of Orchid. These plants are tough and will tolerate extreme conditions. The most important aspect of their culture is that they have a definite and set time to grow and an equally set time not to grow. The species, from which our modern hybrids are derived, were mainly from an area in the lower Himalayas and associated hills in India and the western side of the mountain ranges which run down the Malay peninsula and usually at an altitude of 900-1200m. In these locations they are subjected to extremes of heat, cold and heavy rainfall, so there is no need to pamper them. Summer temperatures of 40 deg. and winter down to 0 deg. (canes must not be allowed to freeze) are tolerated equally well if other conditions are looked after. Good strong canes grown during the summer will be give good flowers next spring. While still flowering or shortly afterwards, the new canes will emerge and start to grow. As soon as they start to show signs of wanting to grow (usually when it is 80-100mm long) start your feeding program. Fertilise according to the rate of growth of the new canes, as the growth rate accelerates, so increase the fertiliser rate. As a guide, start fertilising on the 1st week of November and gradually increase frequency from once per week to twice weekly by about Christmas, then maintain that rate till the end of February or early March, then stop completely. No more is given to the plant until next season, by that time the new cane has reached its maximum height and only has to fill out the top 2 or 3 nodes to finish its growth.

All Dendrobiums have the capacity to produce new growths from their nodes (keikis). This is nature ensuring the survival of the species. It is important to provide plenty of light for flowering size plants, especially in the winter months. From about the end of April they should be left in full sun until the buds appear, but remember that the higher the light level more attention needs to be given to watering in hot weather. Plenty of air movement around the plants helps to reduce the temperature of the leaf surfaces and prevents burning. During the summer, which corresponds with the wet season in the region where the plants originated, plants require copious amounts of water and as high a humidity as it is possible to provide. After the growth has finished in the early autumn, watering can be tapered off so that by July it should be only necessary to water every 5 to 7 days, if weather is dry, increasing again as flowers start to develop.

Re-potting is best done as soon after flowering as possible and before the roots on new canes can be damaged. When dividing or trimming old growths at re-potting time  leave 3 years growth on the plants. Those old canes act as a reservoir for food for the new growths. A mix of bark, perlite and charcoal suits these orchids grown on the Gold Coast.

Flowering
Soft Cane Dendrobiums need a cooling off to initiate flower buds, a month of nights at about 10 deg. C is recommended, but 13 deg C has been found to be cool enough. If plants are placed in a position where good light reaches the full length of the flowering cane at bud initiation time, you will find that they develop over a greater length. If crowded together, at that time, flowering will be confined to the top sections.

Summary
Fertilise and water freely all summer.
Stop fertilising not later than mid March.
Water all year if conditions are dry.
Grow with plenty of light and air movement.

Keiki’s: Make sure these are well developed before removing them, (too early and there is a long period of stagnation). Do not plant them too deep or new growths will be buried. Old canes can be cut into 75mm segments or left whole and laid on moist sphagnum or vermiculite. These will throw growths in 3-4 months.

Be vigilant for signs of the leaf eating caterpillars which can shred leaves in a couple of days.

Some clones flower more easily than do others. Go to shows, write down the varieties that take your eye, and remember, purchase good strong healthy plants.