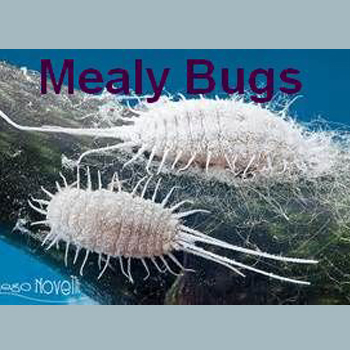 HOW TO IDENTIFY AND CONTROL COMMON PESTS

When you first notice pests on your orchids, you need to promptly and properly identify them so you can be sure to apply the most effective control. In many cases, especially if there are many pests present, you’ll have to apply control measures every seven to ten days, at least three times because eggs are resistant to the control and hatch later.

The honeydew excreted by sucking insects is attractive to ants and is an ideal medium for sooty mould. When sooty mould is present, inspect the plants for aphids, mealy bugs, scale and mites.

Aphids: These come in all colours – including green, red, pink, black and yellow. They are sucking insects that attack buds, flowers and new growths and transmit disease from plant to plant. Buds and flowers may fail to open and leaves may have a sticky deposit. Look for clusters of aphids on flower buds and young shoots and leaves. If you see clear sticky droplets anywhere on your plant, check for aphids.

Mealy bugs: Mealy bug infestations appear on plants as tiny, soft-bodied insects surrounded by a fuzzy, white mess around the stems and leaf nodes. The visible mealy bugs are actually the females. They are small 2.5mm insects with fringes around their bodies and depending on the species, twin tails. Male mealy bugs are tiny winged insects that are rarely seen on plants. The main species of mealy bugs are long tailed mealy bugs (Pseudococcus longispinus) and citrus mealy bugs (Planococcus citri). Control methods for both species are similar. Mealy bugs are related to scale insects. They cause damage by sucking the juice from their host plants. Like many pests, mealy bugs tend to favour new growth.  Over time, their damage causes the leaves to yellow and eventually drop from the plant.  They can also cause fruits, vegetables and flower buds to prematurely drop off. In a bad infestation, their waxy excretions (also known as honeydew) encourages the development of sooty mould fungus. Female mealy bugs hide their eggs in the fluffy white excretions. Eggs hatch in about 10 days, producing crawlers or nymphs. The nymphs relocate to another part of the plant and spend another 4 to 8 weeks developing into the adult form.

Thrips are very small sucking insects that feed on flowers and occasionally leaves and can transmit disease from plant to plant. Infested buds may not open and flowers may be deformed exhibiting water soaked spots. Leaves may appear pitted, stippled, silvery or bleached.

Scale are sucking insects that attach to and feed on the underside of leaves, in leaf axils, on pseudobulbs and on rhizomes. They often are hidden under old leaves and pseudobulb sheaths.  Severe infestations cause chlorotic areas to appear on the leaves and plant surfaces which will yellow and may darken and can cause the leaf to drop prematurely. The white boisduval scale is the bane of the cattleya grower’s existence. Mature males are cottony white masses while the mature females lay their eggs under whitish circular shields. The crawlers are the nymph stage that emerges from under the shield until they find their new home. Hard scale is another armoured scale that ultimately forms a brown conical structure protecting the scale underneath it. Soft brown scale is light yellowish to dark brown with oval to circular shells appearing on leaves, flowers, flower spikes, pseudobulbs and sometimes rhizomes and roots. Soft scale produces honeydew while hard scales do not.

Whiteflies are small, moth-like insects that attack buds, flowers and new growth. The tell tale sign of whiteflies is a cloud of tiny white insects arising from an affected plant when it is moved or disturbed.

Treatment for aphids, mealy bugs, thrips, scale and whitefly: Wash them away; sucking insects can be dislodged with a steady stream of water. Repeat the treatment as necessary. This is best for light infestations. Spray with a systemic insecticide containing Imidacloprid (a broad spectrum insecticide) available from Orchid Den,  that kills and controls a large range of pests, including Aphis, Mealy Bug, Scale, White fly, Thrips, sucking bugs, Azalea Lace Bug and Hibiscus flower bug.

Mites are not insects. They are members of the arachnid family.  Mites typically feed on the underside of the leaves and can be found under the leaves as small, red to brown pests. A magnifying glass may be needed to see them. Leaf undersides may have webbing and brown splotches from the mite excrement. The upper surface of a damaged leaf may have a silvery sheen that eventually becomes sunken and turns brown. Leaves may be streaked, stippled or spotted due to lack of chlorophyll. There are three groups of mites infesting cultivated orchids, spider mites, flat mites and broad mites.

Mites – Treatment:  If you notice the beginnings of spider mite webbing on your plants, blast them off with a strong jet of water. Spider mite webs protect them from predators and function as a nursery for eggs, so blasting them away disrupts their life cycle. Strong water sprays also increase the ability of your mite treatment to penetrate protective webbing. Try spraying upper and lower leaf surfaces, being particularly careful to contact all the undersides of the leaves with Neem Oil, available from Orchid Den. During warm weather, new generations mature every 6 days so repeat applications will be required, perhaps 3 applications at 4 day intervals.

When you first notice pests on your orchids, you need to promptly and properly identify them so you can be sure to apply the most effective control. In many cases, especially if there are many pests present, you’ll have to apply control measures every seven to ten days, at least three times because eggs are resistant to the control and hatch later. The honeydew excreted by sucking insects is attractive to ants and is an ideal medium for sooty mould. When sooty mould is present, inspect the plants for aphids, mealy bugs, scale and mites.