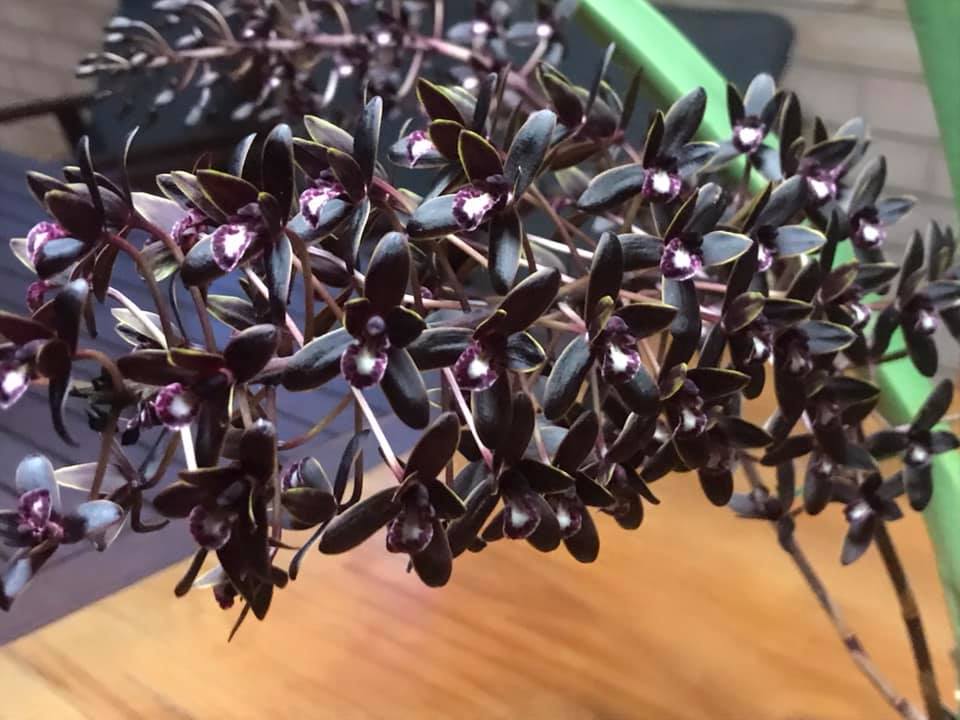 WHY IS MY ORCHID NOT FLOWERING?

This is a list of 5 reasons why your orchid may not be flowering, we hope you find it informative.

Overall, the most common reason that orchids fail to bloom is insufficient light. The Phalaenopsis and Paphiopedilum orchids are usually happy with the filtered light on a windowsill but many other varieties need more light than that. Dendrobium, Cattleya, Oncidium and other medium to high light orchids may need time spent outdoors in the summer to get the kind of light levels they require to bloom. Orchids are not like tomato plants, the vast majority cannot handle full sun. Dappled shade is ideal and even though a bright window seems like more light than outdoor shade, it is not.

As an orchid gets more light its leaves turn a lighter shade of green. Very light yellow-green leaves usually indicate too much light where very dark forest green leaves can indicate too little light. In summary, if you have a Dendrobium, Cattleya, Oncidium, Cymbidium, Vanda, Brassia or other high light orchid growing indoors on a windowsill and it has not bloomed in a year or two, chances are a lack of sufficient light is the reason.

One approach is to take orchids that require high light and put them in a vanda basket or attach a hanger to the existing pot and hang from a tree branch. Higher humidity supplemented with sufficient watering allows high light orchids to have a vigorous growth season. We’ve seen dendrobiums rebloom with this kind of treatment even after they have languished without blooming on a windowsill for ages. The key to getting the bloom was more light.

Good roots bring good blooms. An orchid may have deceptively beautiful leaves with a root system that is in dire trouble. Often root trouble is the result of over-watering or lack of repotting. Orchid roots need oxygen to survive and without it they smother. The media that orchids are potted in is not like the dirt that traditional houseplants are potted in. Even the best orchid mix breaks down over time and requires replacement. Often fear of repotting will cause people to leave an orchid in the mix for far too long. This may be preventing the orchid from having enough stored strength to bloom.

The selection of a top quality orchid mix is of the utmost importance. Don’t be fooled by generic orchid mixes sold at hardware stores. When it comes to orchid mixes, quality and freshness really matter. Once you see for yourself the difference a fresh mix from the highest quality ingredients makes compared to store brands you won’t ever want to go back to those inferior mixes again.

Watching an orchid carefully can give clues to trouble at the root zone. When we buy orchids at the store they are typically quite young. Over time each new leaf or pseudobulb should be bigger than the previous one or at least the same size. This determination can typically be made when the next new leaf or pseudobulb begins to form, or the plant goes into its bloom cycle.

There are two types of growth patterns for orchids, sympodial and monopodial. The monopodial orchids, Phalaenopsis and Vanda being the two most common, grow up off a single central stem with leaves on either side. We expect to see each leaf be at least as big as the leaf before it and hope to see at least one or two new leaves per year. The next bloom spike on a monopodial orchid comes from the base at the underside of a leaf, usually 2 or 3 leaves down from the newest leaf and on the opposite side as the prior bloom spike. In order to keep blooming over the years, monopodial orchids such as Phalaenopsis need to put on new leaves each year. Over time, as the orchid grows in size and strength it will send out a bloom spike on each side of the stem simultaneously.

Sympodial orchids have multiple growths and usually grow one or more new growths per year. Often the growth pattern looks like a corkscrew with each new growth coming from the side of the one before it in a circular pattern. For example, a young orchid which is purchased in bloom might have 4 or 5 stalks, most with leaves, with the bloom coming from the largest stalk. These “stalks” are actually called “pseudobulbs”. If the orchid does well we expect to see a new pseudobulb emerge from the base of the previous pseudobulb near where the orchid bloomed. During the leaf and root growth period (not the bloom period), usually in summer, this new pseudobulb will ideally grow to be at least as big or bigger than the one that just bloomed. The next bloom spike will come from this new pseudobulb. We are looking to grow the biggest, healthiest new pseudobulbs possible as they will be the source of the next season’s bloom. Ample light, quality fertiliser and sufficient water are keys to healthy new growth. Over time, as the orchid grows in size and strength it will grow multiple pseudobulbs which can all spike at the same time creating an abundance of flowers.

Each orchid type has a time of the year when it naturally will bloom. This may not be the same time of year that an orchid was blooming when it was purchased, as nurseries can force orchids to bloom off-cycle. Plant labels can be very helpful in recording bloom cycles. Most orchids grow during the summer and bloom in the fall, winter or spring. Knowing the season that an orchid blooms helps alleviate the frustration of feeling like “It’s July, why isn’t my Phalaenopsis in bloom again now?”. For example, the Phalaenopsis orchid is most likely to grow new leaves in the summer and early fall, and set a bloom spike in late fall. The spike will elongate during the winter with blooms emerging in late winter or early spring. There are plenty of Phalaenopsis which bloom off cycle for a myriad of reasons (from genetics to culture) but most will follow this pattern.

Many orchids bloom once per year, some twice or even more. Once in bloom some flowers last weeks or months while others can last only days. Some basic research about the type of orchid will identify what to expect. For example, Phalaenopsis orchids usually bloom once per year and the blooms can last for months. Once the flowers fall off it may have a couple of extra flowers emerge from the end of the bloom spike (or branch of that spike) and bloom again. If lots of long-lasting blooms are your goal, then Phalaenopsis is a satisfying orchid to grow. Cattleya, oncidium and dendrobium usually bloom once or maybe twice per year with spectacular blooms that last a month or two.

In nature, orchids have natural stimuli that indicate to the plant that the growth season is over and it’s time to bloom. Some orchids are temperature sensitive and some are light sensitive. Those that are temperature sensitive are often triggered to bloom by the natural cooling that occurs in the fall. This drop in temperature signals to the orchid that the growth period is coming to an end and it is time to get ready to set a bloom spike. Sometimes orchids grown in our homes where the temperature is fairly constant are deprived of this natural cue and will be reluctant to bloom. Temperatures in the 15˚’s for a brief period (1-2 weeks) are usually sufficient to initiate a bloom spike in the majority of Phalaenopsis. Similarly, light sensitive orchids grown in our homes where lights are on after dark can have their natural cycle disrupted. If these types of plants are allowed to summer outdoors they will usually sense the shortening days and begin the bloom cycle.