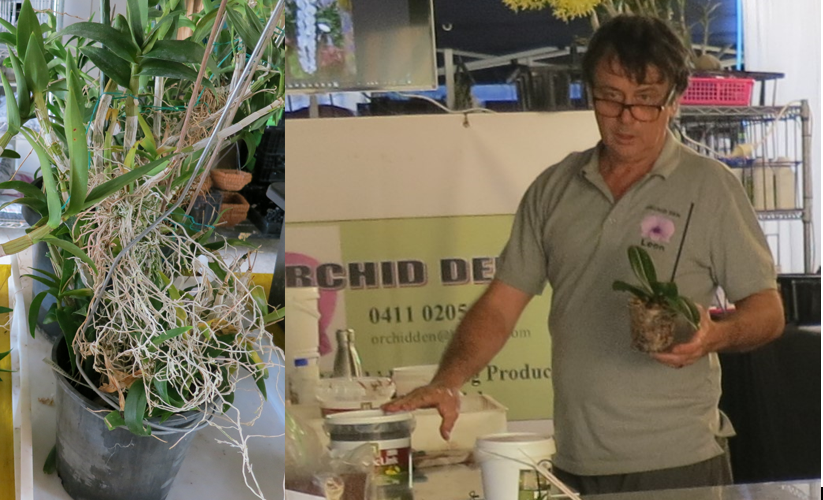 Don’t be afraid to re-pot your orchid. Despite their reputation, orchids are tough and re-potting helps them to thrive. When buying orchids, it is always wise to inspect the mix and the pot that the plant is in. Sometimes the mix is old and the pot does not suit the plant size or offers little or no drainage; if this is the case then re-pot them soon after getting them. Most orchids require re-potting every two years although there are exceptions to this rule.

Re-pot the orchid when it finishes flowering into fresh orchid mix, this gives them the best chance at a successful growth phase and the flowering phase that follows. Try to avoid re-potting in winter when it is cold. Most mixes break down over time and can smother the orchid as they need oxygen at their roots. The freshness and quality of the orchid mix is an essential component to successful growth and flowering.

The phrase potting material isn’t just a fancy way of saying dirt. Generic potting materials can consist of gravel, dried plant fibres, bark and more. You won’t find potting soil in orchid mixes, because most orchids have roots that need more air space than soil can provide. Orchids also need potting material that drains rapidly and at the same time retains some moisture. Because orchids usually go at least two years, and many times longer, between re-potting, they also need materials that are slow to decompose. Don’t be fooled by generic orchid mixes sold at hardware stores. When it comes to orchid mixes, quality and freshness really matter. Once you see the difference a fresh mix made from the highest quality ingredients makes compared to store brands you won’t ever want to go back to those inferior mixes again. Choose a potting mix that suits your particular type of orchid and one that you feel comfortable with, no single potting material works best for every orchid or orchid grower. The most commonly used potting media is a mixture of orchid bark, perlite and charcoal. Sphagnum moss can be used with great success on small orchids and orchids that are in a poor condition. Sphagnum moss however does require product knowledge for its use. Once you have selected the correct orchid mix for your orchid place the required amount into a bucket of clean water and add a generous amount of seaweed extract which is a tonic – not a fertiliser. You can also add a fungicide to the water such as Chlortan.

When re-potting and handling potting mediums light weight gloves should be worn for protection against any micro-organisms that may be present in the mixes. The medium should be thoroughly saturated. If you are using a clay or wooden pot soak it as well. A dry mix and/or pot will draw moisture from the plant and may cause stress and damage to the plant. Sharp scissors will be required. Always sterilise tools before and after each use as you could transfer diseases from plant to plant. Orchid Den recommends keeping the tools in a solution of trisodium phosphate, this is a non-corrosive, heavy duty steriliser. Remove any wire plant-tie and stakes that may be anchoring your plant. Remove the plant’s label and place it to one side where it won’t get lost. If you want to reuse the original pot for another orchid, sterilise it using the trisodium phosphate solution.

REMOVE THE ORCHID FROM THE POT

Soak the orchid and the pot in a bucket of water for a couple of hours then place the side of the pot against the edge of your workbench and roll the pot from side to side, pressing downward against it as you roll. This will loosen the roots and bark. You should now be able to remove the plant without much effort. If the plant still won’t come out you may have to cut the plastic pot from top to bottom and peel the pot away from the root mass. If your orchid is planted in a clay pot, its roots are likely to have attached themselves against the sides, making removal difficult, in this case try soaking it for longer.

PREPARE THE ORCHID FOR RE-POTTING

When removed from the pot the roots will often be in a tight mass, gently separate the roots. If you cannot separate the roots as they are too compact you may need to cut a few to enable them to be separated. Remove as much of the old mix from between the roots as you can by using a hose or tap. Remove and cut away any dead roots. This is a very important step to ensure your orchid will grow well and not succumb to root rot over the next couple of years. Healthy roots are firm, with a whitish or light brownish covering. Do not feel tempted to give healthy roots a “hair cut”. Do not re-use any old mix for your orchids, rather put the discarded material onto a garden bed. Clear your work surface of old bark and dead roots. If you are re-potting a Cattleya carefully peel the brown sheaths from the pseudobulbs and inspect for insect damage, do not peel the green sheaths from any new growth. Dead bulbs and canes (brown and shriveled) can be removed, but don’t remove any green bulbs or canes, even without leaves, as these are storing food for the orchid.

Roots are the basis of any orchid plant. It’s very important for your orchid to have a robust root system; the orchid takes in water and nutrients through its roots which in turn allows the whole plant to grow and thrive. Good roots bring good blooms. An orchid can have deceptively beautiful leaves with a root system that is in trouble. Often root trouble is the result of over-watering, under-watering or lack of re-potting.

RE-POT YOUR ORCHID INTO ITS NEW CONTAINER

Orchid Den’s Root Extender contains blended mycorrhiza and other beneficial live fungal spores, essential to the germination and the growth of Orchid Plants and can help promote good root growth especially on Phalaenopsis Orchids. It is important that you select the correct pot for the type and size of the orchid. Generally orchids prefer to be snug in their pot. If the roots are healthy, firm, and filling the pot, put the orchid in a pot just one size larger than the one you removed it from. If the roots are rotted and in poor condition, re-pot the plant in a container of the same or one size smaller than it was removed from. If you place a poorly rooted plant in a container that’s too large, the growing material will stay too damp, which will result in root rot and loss of the plant. If you are re-potting a Cattleya, position the oldest growth in the division against the side of the pot with the new growth facing the middle. If your orchid is monopodial, with a single main growth from which roots grow (such as a Phalaenopsis or Vanda), position the plant in the centre of the pot so that its roots are more or less spread evenly on every side. Keeping plant and pot stationary with one hand use the other hand to fill the pot with the wet mix and cover the roots and press the mix down firmly into the pot. The orchid should not move independently of the pot when given a gentle shake. If the roots are not long enough (or healthy enough) to give this security, then you need to stake the plant. Push the stake down into the potting medium beside the plant and secure the pseudobulbs or the canes to the bamboo stake at a level high enough to support your plant, using tie wire, daisy clips or a plastic pseudobulb clip. A rhizome stake can be used for short orchids. If your orchid has very poor roots and they are short in length you can put a piece of polystyrene into the base of the pot and push the bamboo stake into this giving a much more secure base to hold the orchid.